Facebook CEO, Mark Zuckerberg, recently appeared in front of the United States Congress for a hearing about Libra cryptocurrency. The hearing lacked substance. Most congress members did not inquire deeply about Libra. They instead delved into smearing Facebook and its credibility. Both sides point fingers at each other. Crypto aficionados laments the lack of openness from regulators to new technologies. Regardless, there is deep misunderstanding and distrust between the public and the tech community.

Since the birth of Bitcoin, crypto builders have been developing the wrong solutions. The first generation of cryptocurrencies were hard forks of Bitcoin. They tried to create so called better versions of Bitcoin. Then there were efforts to generalize Bitcoin to blockchain technology. These trends continue. But we still end up with no cryptocurrency that we can use for everyday transactions.

It’s time to resolve the ideological debate between centralization and decentralization. Historical trends in technology told us that we swerve between these two polars. We cannot completely settle into one place. That would be utopia or dystopia. We went from mainframe (centralized) to personal computers (decentralized). Then we made the transition to cloud computing (centralized). There is now effort to decentralize the cloud computing stacks. The cycles never end.

Each cryptocurrency makes their own design tradeoff. It it useful to think about monies in a spectrum. 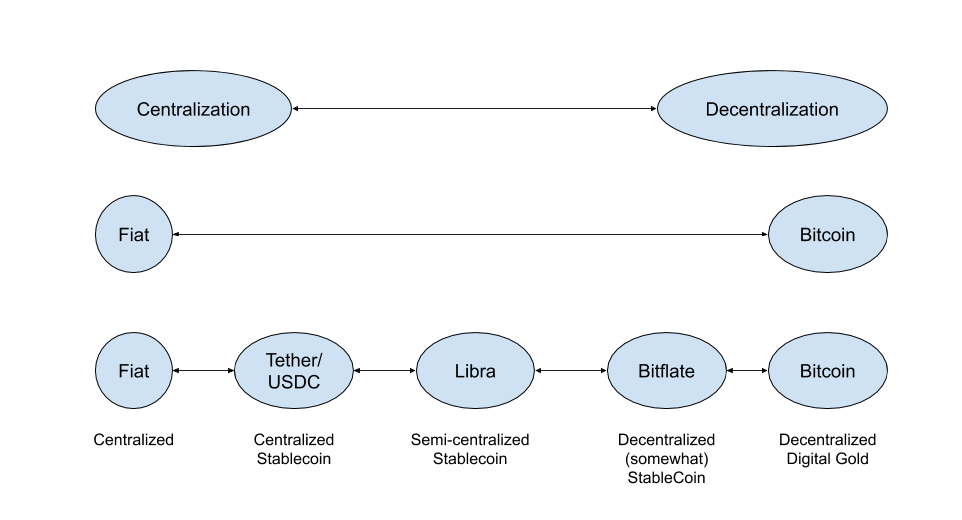 As we move from Centralization and Decentralization, we get different kinds of currencies. Each comes with their own advantage and disadvantage.

Libra is a semi-centralized cryptocurrency. It is a better version of centralized cryptocurrencies like Tether or USDC. These coins are issued by a single entity. There is no way to audit their record. We rather have a stablecoin issued by an association of companies. The Libra Association has a governing charter. It is beneficial for consumers having member companies audit the Libra record. These member companies have competing agenda. They serve as check and balance for consumers.

Libra is too early

Unfortunately, Facebook initiated the Libra project. The company was involved in many data and privacy scandals. Consumer’s trust in Facebook is low. Another hurdle for Libra adoption is the public’s misunderstanding. Bitcoin is difficult to understand. Most people don’t have time to dive into its details. Its price fluctuates wildly. They don’t see benefits of cryptocurrencies. Bitcoin has as many critics as believers. The public has not accepted a crypto future. To normal people, Libra is another effort by big corporations to intrude and control their lives.

Filling the gap with Bitflate, a decentralized stablecoin

Bitflate is a cryptocurrency with constant inflation rate of 7%. The project’s goal is to create a digital native and decentralized stablecoin. By adding inflation, Bitflate price will not rise forever. It will have less price volatility. Bitflate can be a gentler introduction for people to the world of cryptocurrency.

A cryptocurrency future is inevitable. There will be many cryptocurrencies. Each will have a different design and tradeoff. Instead of thinking about zero-sum games, we need to look forward to this future. We will have greater financial freedom. We can choose the best currencies for our financial goals. Governments and companies will soon join this vision. At the end of the day, we the people, are in control.