With halving expected in May 2020, Bitcoin is building up momentum to rise to the next level. Bitcoin bulls tout rising hash rate, halving reward, lightning network, global instability as major reasons for price appreciation. Maybe, it will reach trillion dollar market cap. The 2018 bull run was catalyzed with altcoins and ICOs. Some argue that ICO was distraction. But it’s difficult to say Bitcoin price would rise to almost $20k without the hype of ICOs. This time, the market for altcoins and ICOs seem dead. Bitcoin market cap dominance continues to rise. The lonely king will need to prove to the world.

But it is naive to think that these known fundamentals will drive Bitcoin price to the next level. I believe Bitcoin adoption is the key driver of price. Being able to use it is important. In this post, I describe what I see as the missing link of Bitcoin to the world.

Despite of talk about decentralization and financial freedom, the most dominant narrative around Bitcoin leads to centralization of people’s finance. In this model, users put all of their money in Bitcoin. When they need to spend, they use or convert the needed amount of Bitcoin. Figure 1 depicts money flow in this model.

This model probably comes from engineering mindset. It’s logical and optimal. But real world is usually neither logical nor optimal. People categorize and separate things. Money is one thing that needs separation. Mixing money use case leads to loss. This is why recurring and passive investing often delivers better result than actively managed investing.

The Messy World of Personal Finance 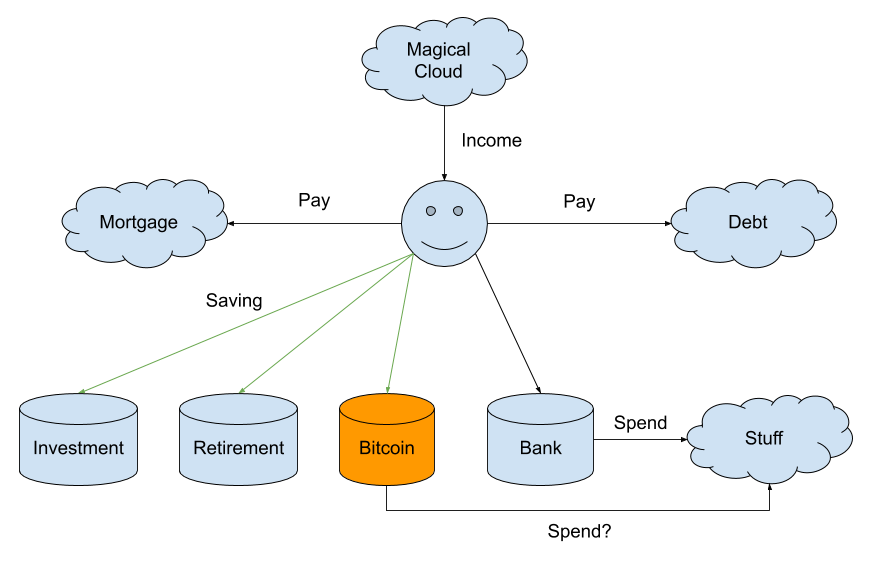 Can Bitcoin ever be used for direct spending?

I think the answer is mostly No. The reason for it is mostly psychological.

As I mentioned in the first section, people don’t like to mix money use case. If it is possible, people are already using their saving and investment for direct spending. Figure 3 depicts a model of direct spending using investment or Store of Value. I think it is unlikely to happen. 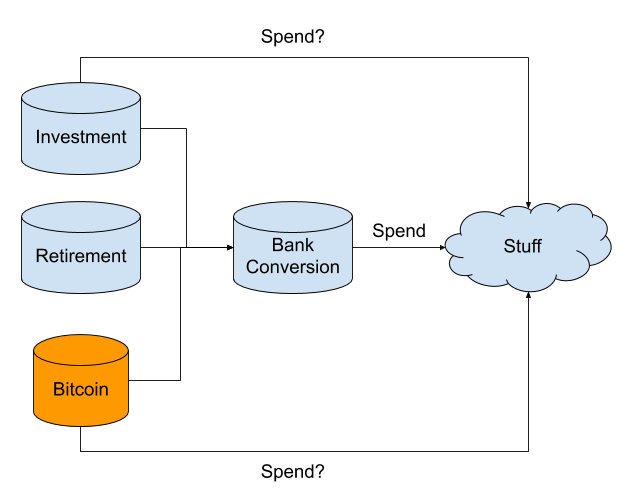 I think the missing piece in this puzzle is a crypto currency for spending. It is nerve wrecking to open your Bitcoin account each time you want to buy a small item like coffee. If we separate spending out of saving, we introduce familiar setup of personal finance into the picture. Figure 4 adds an adjustment to Figure 1. 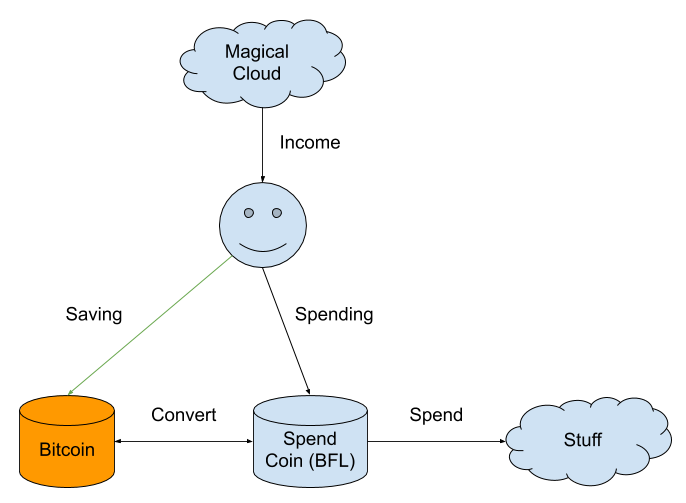 A crypto currency for spending gets users familiar with crypto software. User can swap between Bitcoin Store of Value (saving) and spending coins. Spending tokens are also less valuable than bitcoins. Account separation provides additional layers of security and peace of mind.